skip to main | skip to sidebar

I finally have started adding links.A very belated act!
I'm hoping to add more and organize them properly soon.
Thanks to those friends who have already had my link on their blogs.
Posted by Nusret Topuzoğlu at 5:55 PM 2 comments: 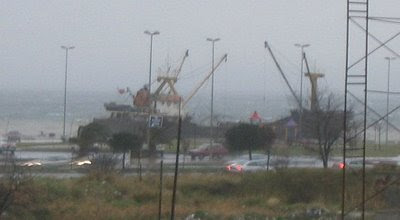 The first shot I took recently through my window with a hope that a painting might come out of it.
The second one is the photo of the same coaster the day before yesterday .There was a very strong southernwest storm coming from the sea that day.I later read in the news that over open sea the storm had reached a speed of 100km/h,it was probably around 70km/h here. When I was watching the storm from my window I noticed that ship's prows detached from the dock and while she was tied up at the stern the prows was getting dangerously closer to rocky shore.Either the prows hawser was broke off or she was dragging the anchor.She was about to crash on to the rocks.I wanted to see the event and I was there in five minutes by the car.There was no one else around-no fools wandering around in that weather naturally.The man on board asked for help and tried to throw me a guide rope.Voice communication was impossible because of the noise of the wawes and wind.After repeated attempts failed ,I managed to grab the rope while I was soaking wet with rain,heavy spray and wawes coming over the pier.I pulled the guide rope with difficulty which was tied to a very heavy hawser and finally able to get the hawser over the mooring post at the end of the pier.I can say this wasn't an easy work with the risk of slipping and falling down into the sea. Then they tried to draw the prows towards the pier by means of a capstan.This was again not an easy work against terrible wawes and wind.I couldn't stay there any longer because I was getting very cold.I returned home,peeled my wet clothes off (even my underwear was soaking wet) and took a shower.I took this photo on my return.Many hours later they managed to secure the ship mooring at the prows.Today the ship looks safely moored in the quiet sea.
It was a very wet adventure,something definitely expected from a wet on wet artist!
When I asked my wife if she saw me doing this through the window she said she wasn't looking ,she was busy in the kitchen from where she could see me in the distance.She said that I was a funny man!
I am still waiting for an inspiration from this event!

It's been a while since I last posted.I've been preety inactive recently and done only a couple of small paintings,nothing serious really.

First one is a very quick,spontaneous piece I did on the back of a scrap paper,no prelim drawing while playing around with colours..It shows stains already on the paper but they somehow fit the scene.I kind of like its simplicity.35x30cm paper unknown! This is a redo of an older piece sold in the last show.Size around 1/4 sheet. 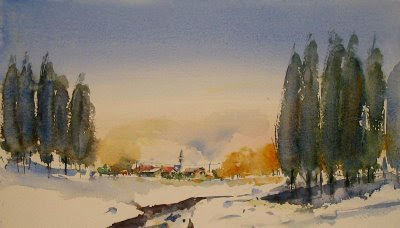 This I did for a challenge in a forum elsewhere.Again 1/4 sheet size.Ref photo by Stephie Butler 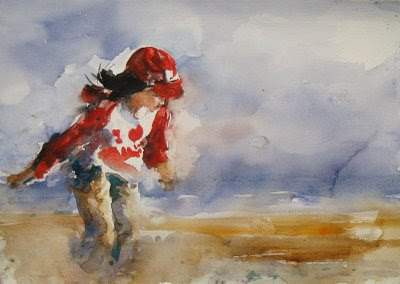